Parodies and notes explanations for Isekai Quartet episode 5 and 9.

3:07 While singing, Erich von Rerugen says “kukkoro” (translated as “kill me”). “くっころ / Kuk… koro!” is a abbreviation of “くっ…殺せ！/ Kuk… korose!” which roughly translates to a frustrated sign followed by  “kill (me)!”. “Kuk… korose!” is the typical line said by a female fighter (usually a knight who also has a lot of pride) in Japanese R18+ fiction after being defeated (typically by sleazy bad guys, orcs, etc.). Typically, the female is denied death and then the ones who beat her have their way with her body. The abbreviation “kukkoro” is usually only ever used as a reference to the situation where someone would say “kuk… kill me!”.

At 10:20 in Episode 6, Darkness / Lalatina Dustiness Ford says this very “kukkoro” as well (translated as “Take me”). Darkness, herself, and the situations she describes of getting sleazily tortured are what is referred to as the previously explained “kukkoro“. 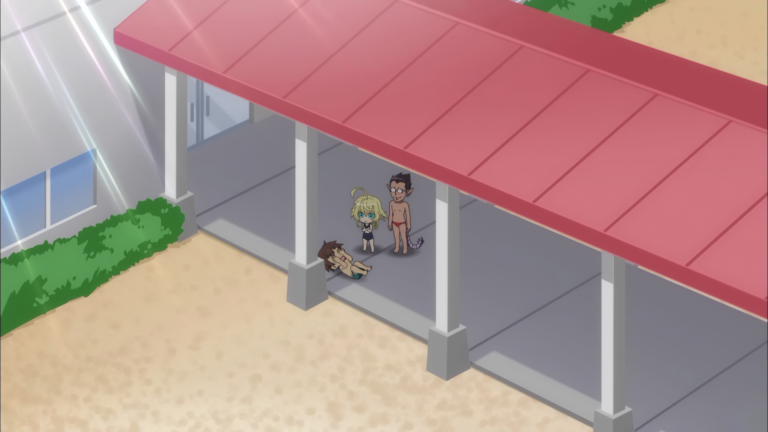 Kazuma’s screaming out “me ga me gaaaa!” (roughly “(my) eyes, (my) eyes!”) in pain while holding his hands to his eyes following right after from Ram’s saying “Barusu”, the miscalling of Subaru’s name, is probably a parody of the scene in the anime film Tenkuu no Shiro Rapyuta / Laputa: Castle in the Sky. In the film, “barusu” is like the code which causes the castle to self-destruct and causes flash of light which blinds a certain character and made him scream out “me ga me gaaaa!” and do the whole holding the hands to the eyes thing much like Kazuma did.