Parodies, references and notes explanations for Dr. STONE episodes 10 to 20. 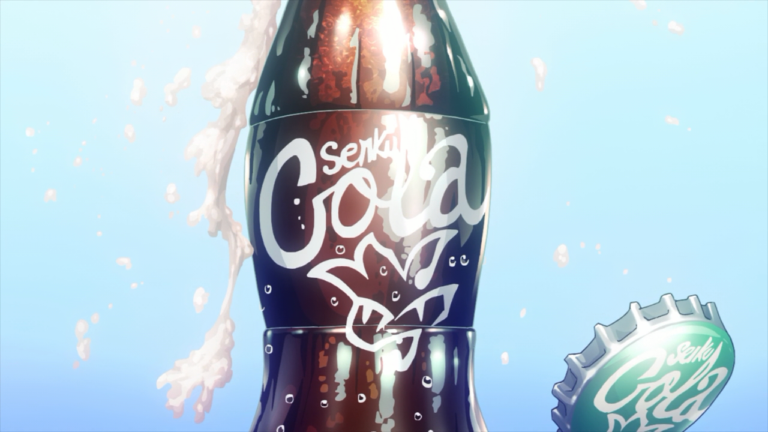 The Senku’s Cola is a parody of Coca Cola’s cola in a glass bottle. 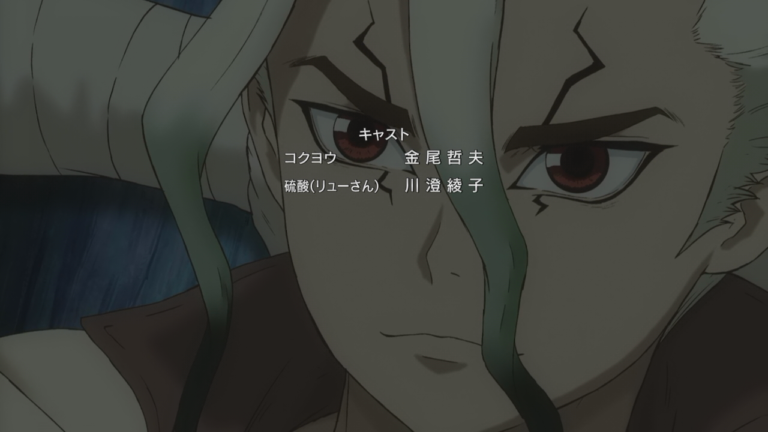 The second line in the credits is the credit for the sulfuric acid. In Japanese, sulfuric acid is “ryuusan / 硫酸”. In the brackets is “リューさん” (literally “Ryuu-san”, the name “Ryuu” with a “-san” honorific). 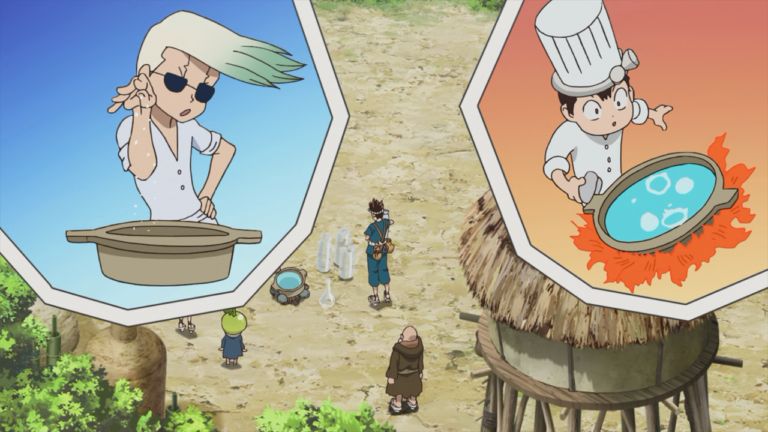 On the left, Senkuu parodies the chef Nusret Gökçe / Salt Bae in his typical wear and salt sprinkle technique. 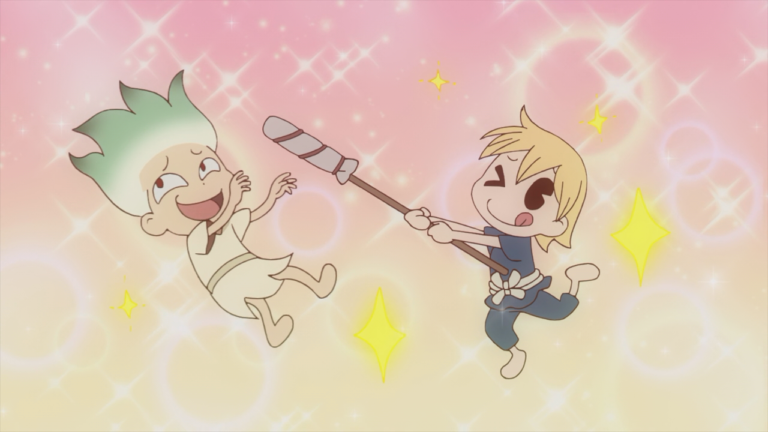 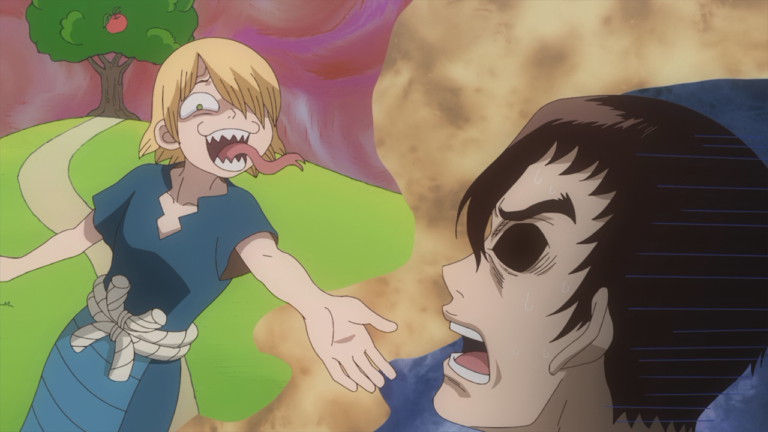 Senkuu and Ginrou parody the serpent which tempted Eve to eat the forbidden fruit in the biblical narrative עֵ֕ץ הַדַּ֖עַת ט֥וֹב וָרָֽע / Tree of the knowledge of good and evil. In the background seems to be apple which is a typical portrayal of the forbidden fruit.

7:32 Ginrou who was talking was supposed to say “Kinrou” who he was talking to, but said his own name “Ginrou”, instead.

9:39 Senkuu uses the second-person pronoun “temee” to address Ruri, which is a particularly rude way to address most people.

17:58 “hyaku oku bai” was translated as “ten billion percent”, but it should be “ten billion times” which is a factor of 100 times more.

19:18 As Suika gets to the top of the pillar, the Mario coin sound effect can be heard.

1:22 Magma says “koe moe de nee” which was translated as “I can hardly even speak”. However, it should be “(my) voice doesn’t come out either”, that is, he can’t even speak at all. As the viewer, it’s obvious he can speak and he is clearly being contradictory.

8:33 “batsu ichi” was translated as “divorced” which is not wrong, but only if it is the first divorce. “Batsu ichi” is literally “1 x mark” (on a family register which denotes 1 divorce). It is interesting that such a term was used by Ruri as there are probably no registers to put any x marks on.

8:50 Kinrou’s line “jibun ni setsumei shitekudasai” was translated as “Please let him explain for himself“. However, Kinrou then starts explaining. Probably it was a misinterpretation of the line which could also translate to “please let me(Kinrou, the speaker) explain”. 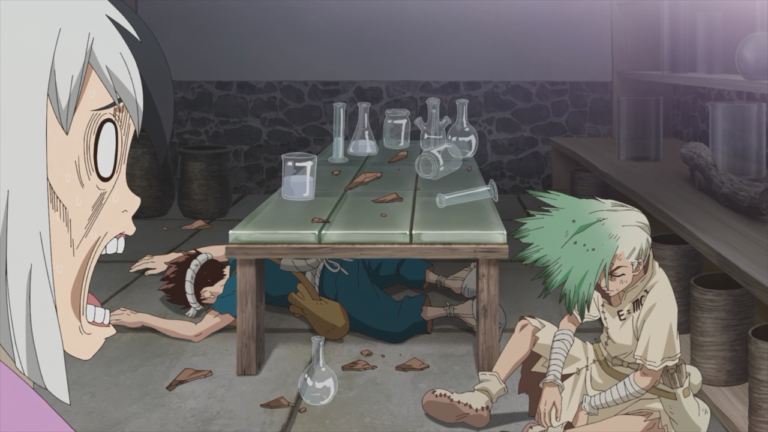 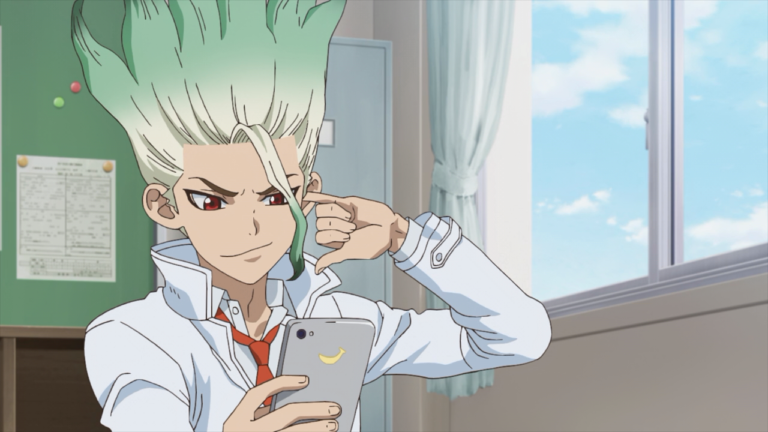 The banana icon on the back of the phone is a parody of the apple icon, and the phone’s back and front closely resembles the apple iPhone 4. 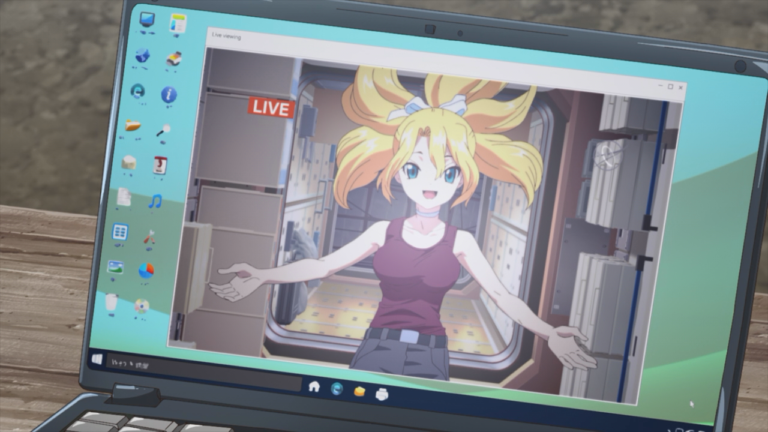 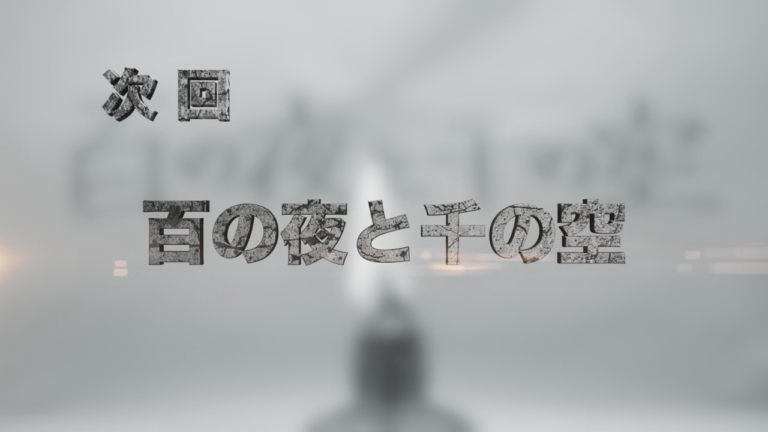 4:22 The thug says “hyahhaa” which is the shout of joy of the typical thugs from the Hokuto no Ken / Fist of North Star manga. 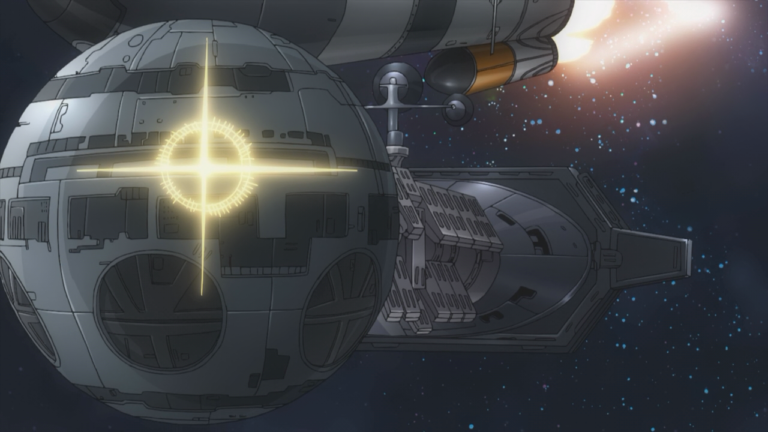 The spherical structure is the United States Spacecraft Discovery One from the film 2001: A Space Odyssey. 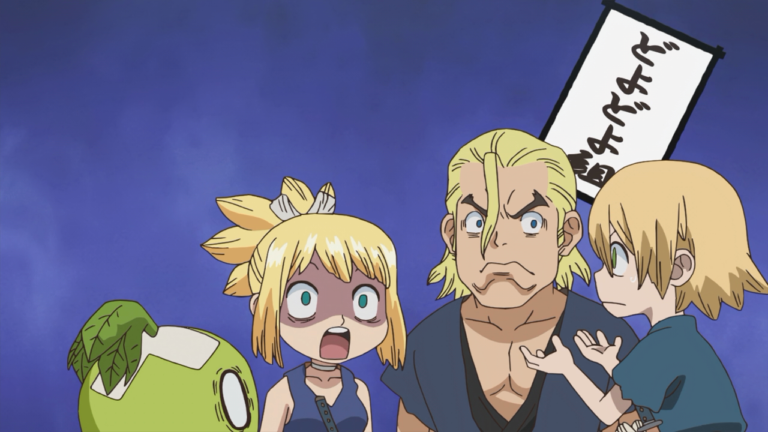 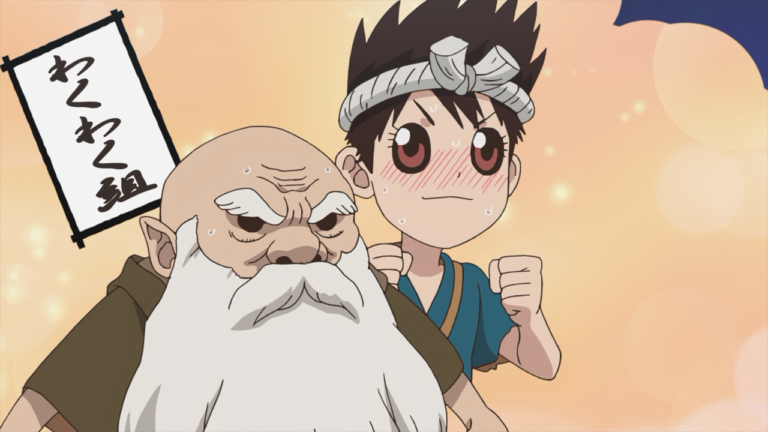 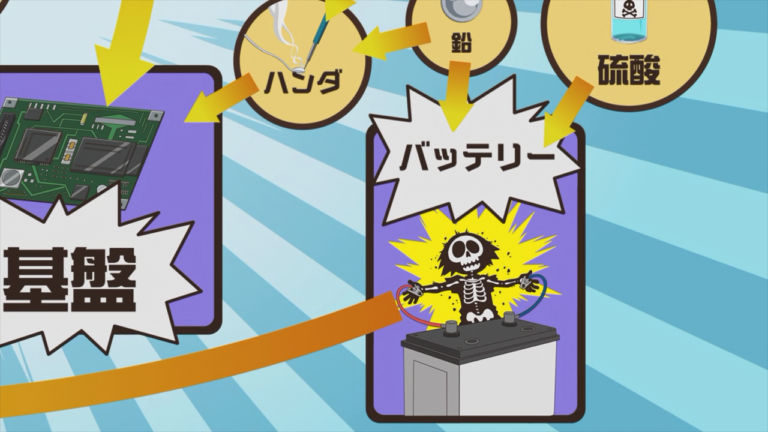 The anime used the commonly misused wrong kanji for the term “circuit board”. The kanji ”基盤” (foundation) was used instead of “基板“. The first kanji is same in both terms and both terms are pronounced “kiban”. 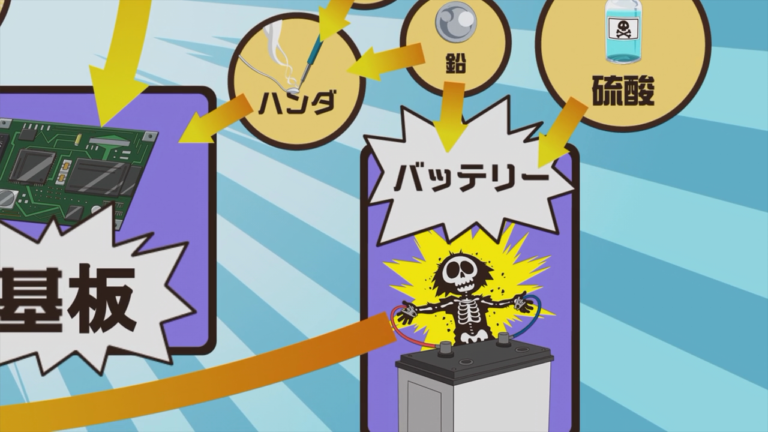 The incorrect kanji usage for the term “circuit board” from episode 19 was corrected in episode 20, where it correctly reads “基板“.

5:37 The line “yasashiku oshiete” was translated as “hurry up and tell me”, but should be more like “tell (me) gently”. 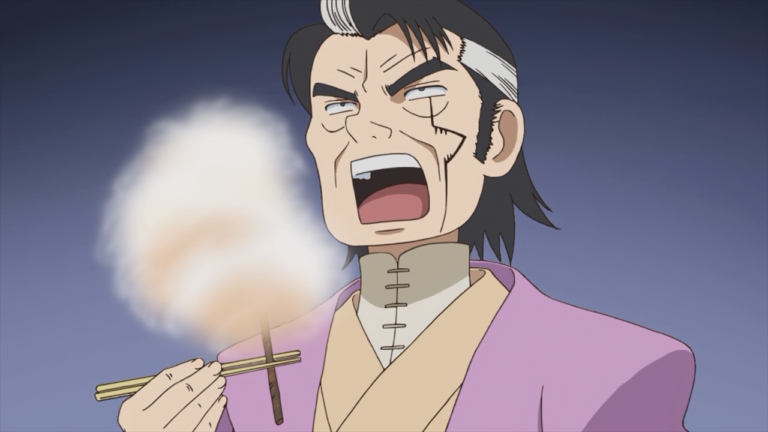 14:45 “Nori tsukkomi” was translated as “go along with a meme”. “Nori tsukkomi” is going along with some kind of “boke” (some act that is silly or that should get pointed out as being wrong) for a while before stopping midway to point out what’s wrong with the boke. 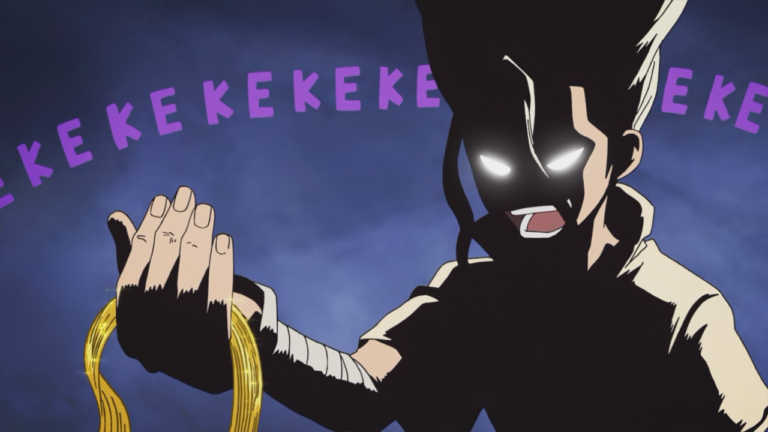 The repeated “KE” in the background is a peculiar laughing sound. “Ke” also happens to be one way of saying “hair” in Japanese, and the gold cotton candy (translated as “golden threads”) resembles gold hair which may have been a pun.