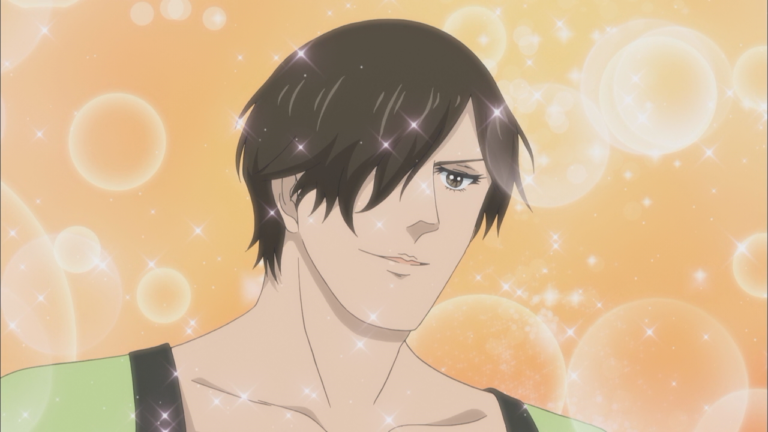 The art of Shibata Genzou / Kemonaa Mask is similar to that of the manga Versailles no Bara / The Roses of Versailles.

4:26 “kezukuroi” and “torimingu ni iku” were translated as “pick nits out of […] fur” and “trim her nails” respectively. More accurately, it should be “grooming” (which includes more than just nits if she had any nits to begin with) and “going to trimming” (which implies going to a trimming service rather than trimming by herself).

19:02 Klaus says “mitomemasu” which was translated as “request”, but should mean more like “approve” as if he had the power to make the decision.

19:19 The nickname the of wolf person was “Bon-chan” (it also appears in the credits as “ボンちゃん”, the Japanese spelling of “Bon-chan”), and that is what the crowd calls him in the scene. In the translation, his name was rendered as “Wolfgang” which is apparently part of his real name according to some sources but had not been mentioned in the anime. 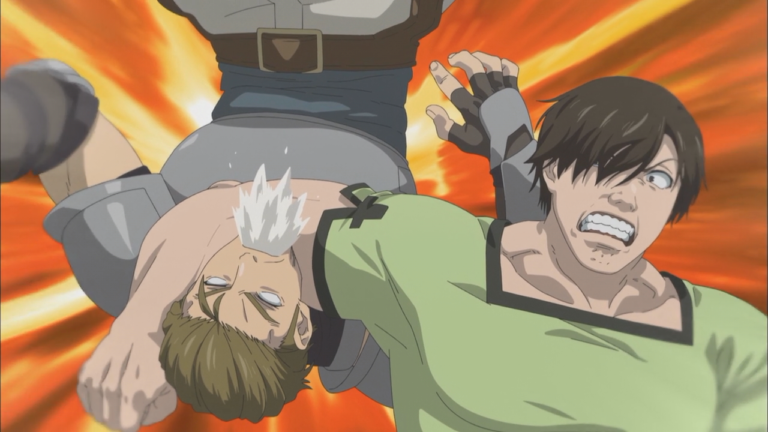 Genzou had already hit the guy before he said the “goroshi” part of “majuu goroshi” (demon beast killer). In the subtitles, there was “Demon beast ki-” as if the guy had already said the part which would trigger Genzou.

3:05 Shigure called Princess Altena Edgardo Ratis “kayoi tsuma” which means “commuting wife”, a wife that does not live with the husband but instead regularly visits him. The official translation of this was “obsessive stalker” which is much different in imagery and connotation.

4:05 Carmilla said of Genzou as “hito no kotowari kara hazureta rouzeki mono” (literally “ruffian who has strayed from the natural way of humans”). The translation had it as “monster without a trace of compassion”.

9:34 In the translation 2 differently sounding names “Katoriinu” and “Kyasarin” were rendered rather similarly as “Catherine” and “Katherine” respectively.

12:31 The girl, Maria, calls Hiroyuki “ko” which literally means “child” but the translation was “dog”. However, there shouldn’t be anyone from that world that would be familiar which dogs.

13:09 Maria talks about “oji-san” (“uncle” or “middle-aged man” and in reference to Genzou) being sad. However, in the subtitles, the line talks about “she” being very sad.

20:06 Joanna Joannascore Adorian Uljika makes a pun with “shiai” (match) and “koroshiai” (killing of each other).

3:35 Carmilla in the background says “toreta” which means “was taken off”, but was translated as “broken”.

5:38 MAO says “toki ga kita sore dake da” (translated as “The time has come. That’s all there is to it”) which is the line said by pro-wrestler Hashimoto Shinya.

10:43 Princess Altena’s line was “tonde ryuu ni kuwareru garuuda” which roughly means “a garuda flying to get eaten by a dragon”, but was translated as “Just like a moth-wyvern to a dragon-flame”. Indeed the line was a parody of the line “tonde hi ni iru natsu no mushi” (like a summer bug flying into the flame) which is commonly translated as “like a moth flying in the flame”.

15:17 The announcer said “back to the lizardman returns Celes”, but it was translated as “once again, Celes XXL”. 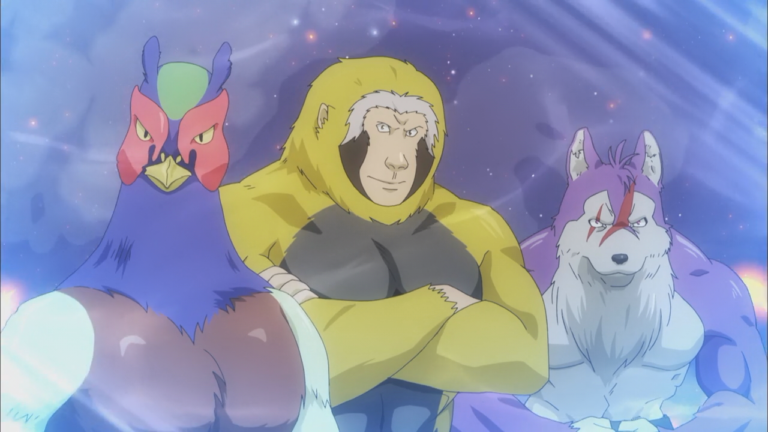 The beast part of the 3 beast-people are from left-to-right, a pheasant, monkey and wolf (possibly dog, but a dog relative in any case), which are the 3 talking animals befriended by Momotarou from the story Momotarou. 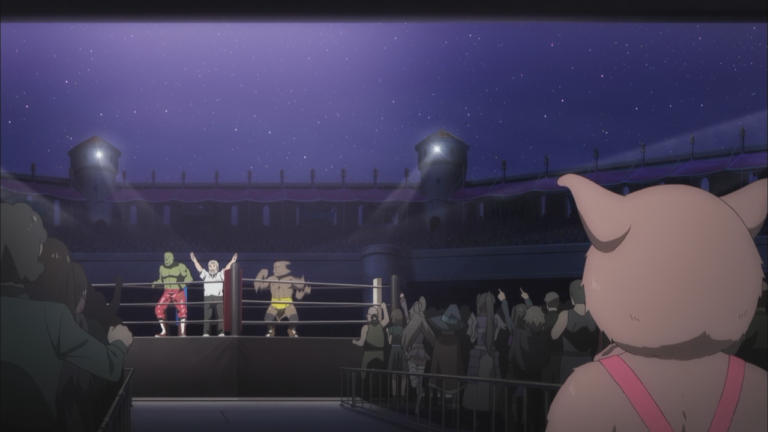 In the front of the right side audience are the main 4 characters Aqua, Megumin, Darkness / Dustiness Ford Lalatina and Satou Kazuma from the light novel Kono Subarashii Sekai ni Shukufuku wo! / KonoSuba: God’s Blessing on this Wonderful World!.

20:09 Rose’s line, “watashi ni katou nante juu nen hayai no yo“, roughly meant “(your) 10 years to early to win against me”, but was translated as “you’ll never beat me”. If vampires live particular long, 10 years may seem a small amount of time and certainly quite different to “never”.

22:11 Genzou says “ore wakuwaku shitekita zo” (translated as “I’m getting excited”) which is possible a parody of the character Son Gokuu’s line “ora wakuwaku suzzo” (same meaning but sounding more like a rural dialect) from the manga Dragonball.