Parodies, references and notes explanations for Watashi Nouryoku wa Heikinchi de tte Itta yo ne! / Didn`t I Say to Make My Abilities Average in the Next Life?! episode 1.

The title is abbreviated as “NouKin” from “Nouryoku” and “Heikinchi“. In common speech, “noukin” in Japanese is literally “head muscle” and refers to the English equivalent “musclebrain”, a person who is physically competent and is the physical type but simple-minded.

Other references, parodies and translation notables 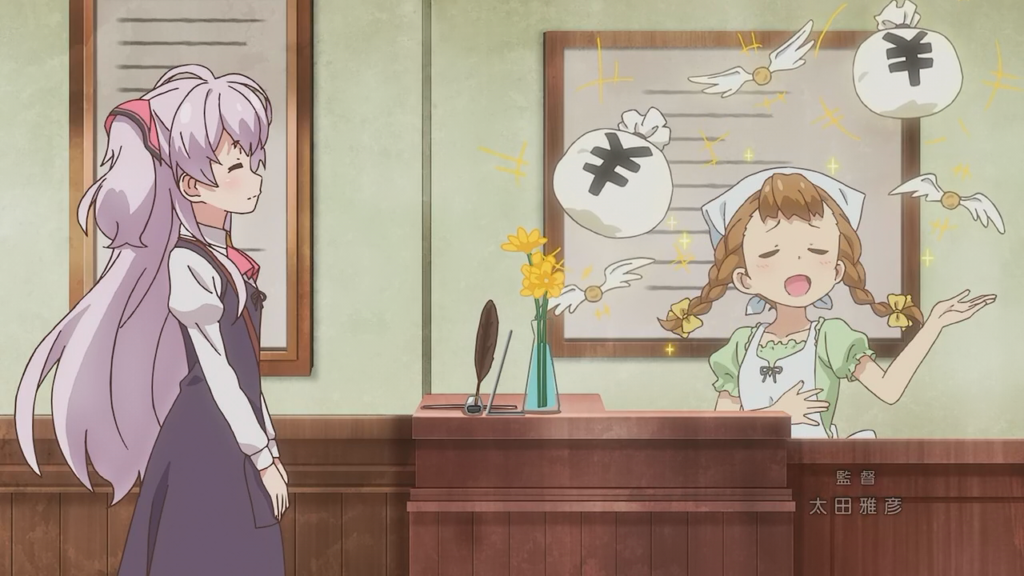 The imagery of money bags (representing wealth) had the “￥” sign which is the Japanese yen. It is peculiar as the currency used so far seems to be coppers, silvers and, possibly, golds. 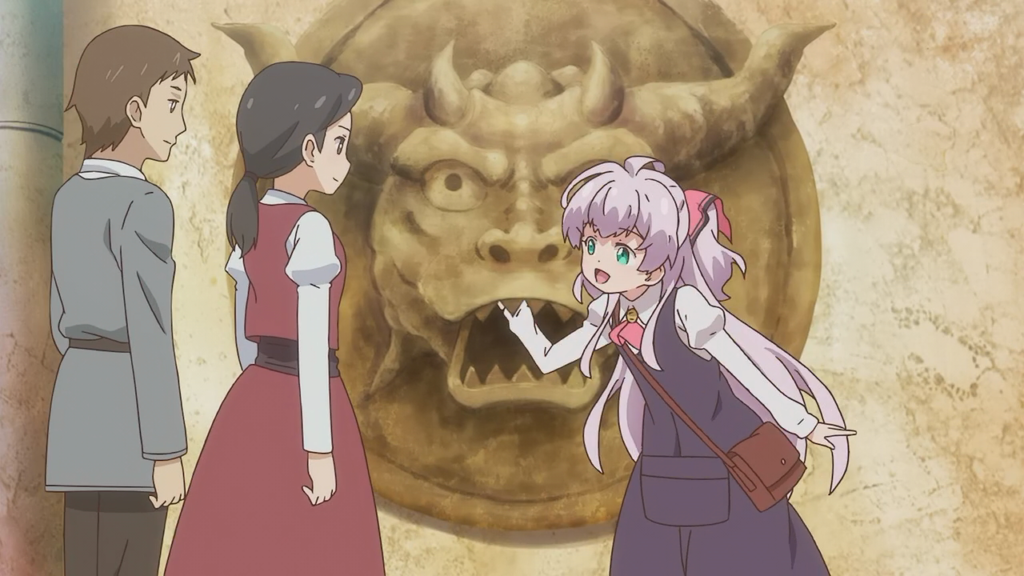 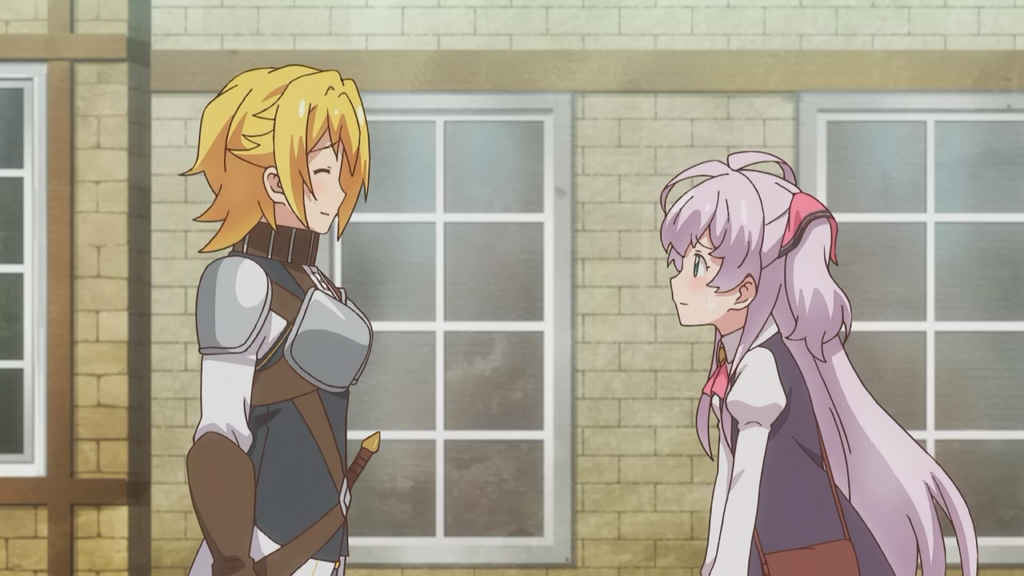 The female knight is referred to as “Onee-nii-sama” which may be a reference to the character Maze from Maze☆Bakunetsu Jikuu / Maze the Megaburst Space who is also referred to as “Onee-nii-sama“. It is more likely a reference considering it is highly unusual to refer to a stranger as “Onee-sama” or “Onii–sama“. Usually, it is more common to use either a “-chan” or “-san” honourific as in “Onee–chan“, “Onee–san“, “Onii–chan” or “Onii–san“. 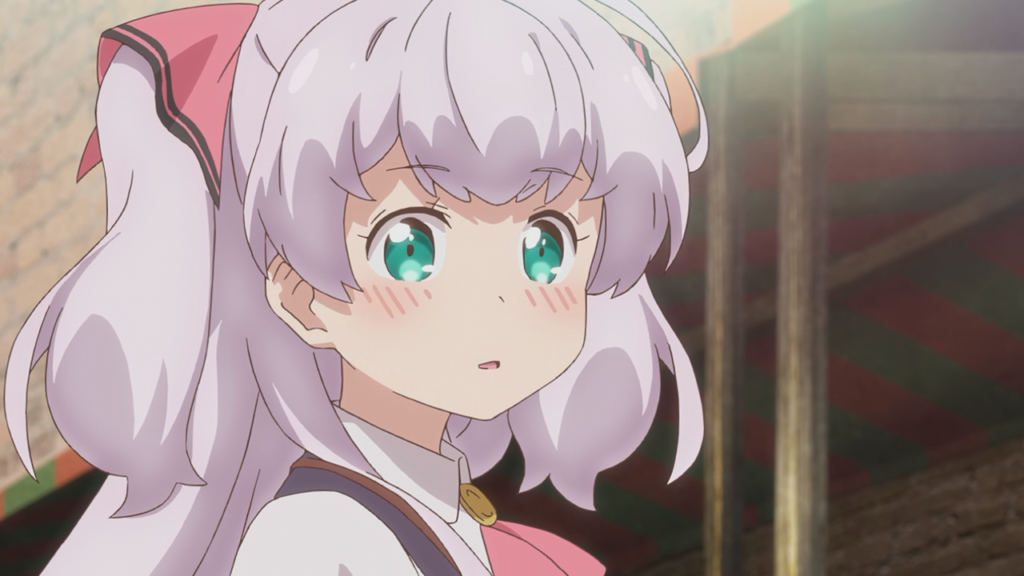 Mile suspected the lady who bumped into to be a “裏表とか無い素敵な人”, literally, a “wonderful person who doesn’t have two sides”. This is possibly a parody of ” 絢辻さんは裏表のない素敵な人です / Ayatsuji-san wa uraomote no nai suteki na hito desu” (literally, “Ayatsuji-san is a wonderful person without two sides”), the line by Ayatsuji Tsukasa from the game Amagami which she forced her classmate to say of her. 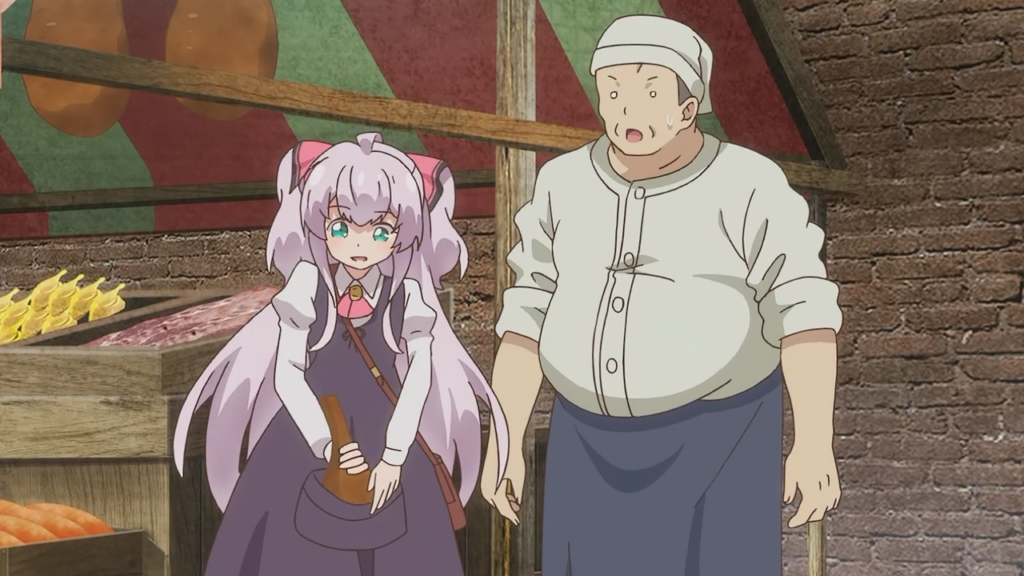 Mile putting away the meat into her front pocket resembles the way Doraemon uses his “4th dimensional pocket”. Both pockets also happen to be able to store objects larger than the pocket itself. 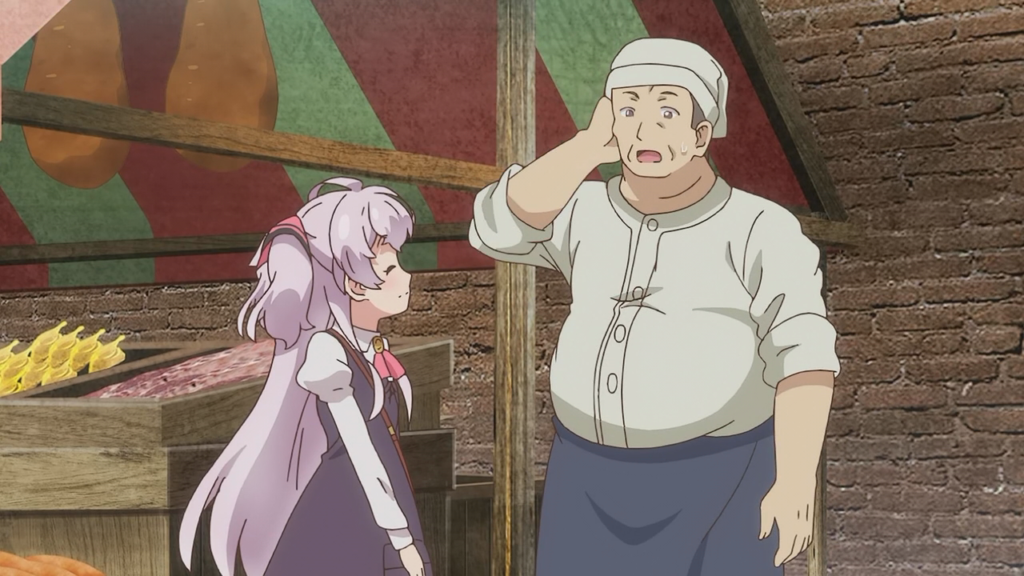 The merchant’s line “tamageta nou” is a possible parody of the line “tamageta naa” from Tadano Kazuhito‘s coach back when he was still at Rikkyo University. Both lines mean something along the lines of “well, that’s astonishing”. 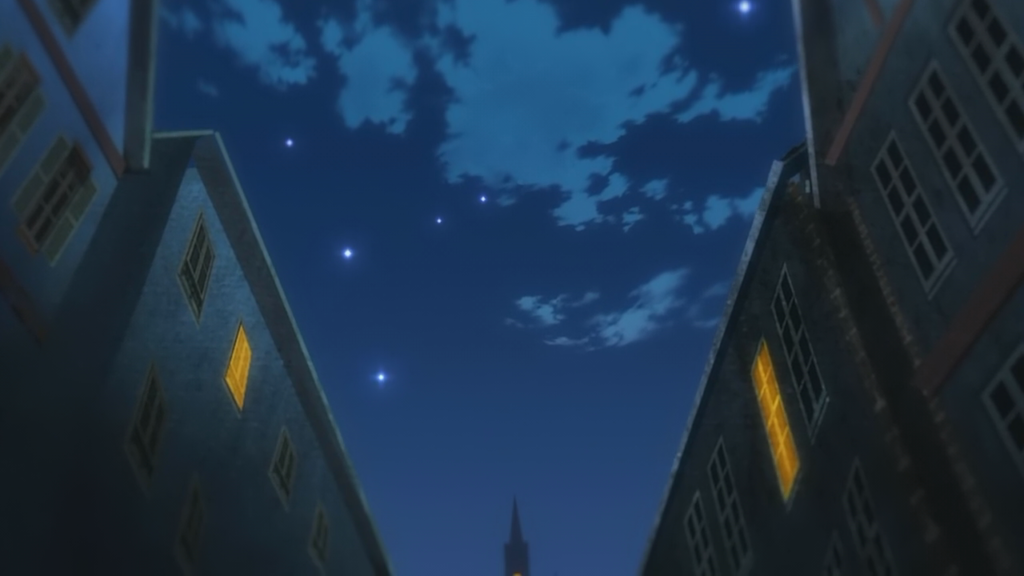 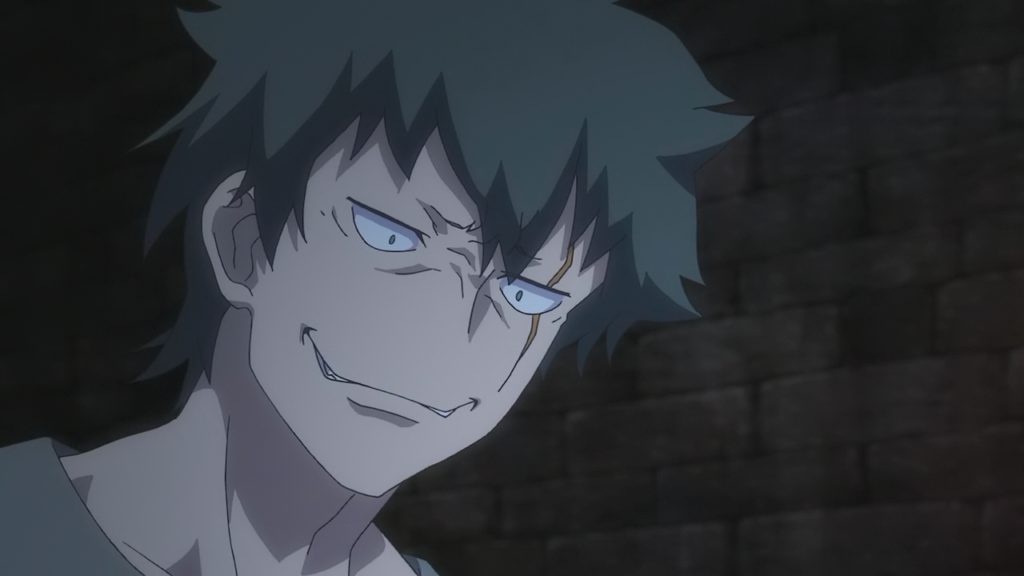 The “guhehe” laugh is the laugh typical of a bad guy about to sleazily victimise someone. 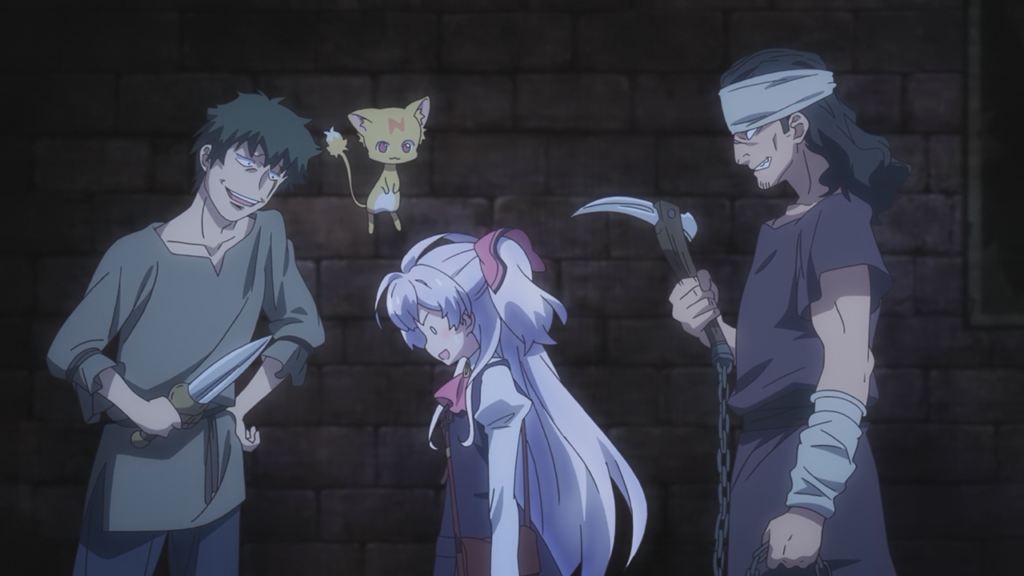 The official translation with the lines “I didn’t think I’d get caught the second I walked in” and “You might’ve been a little too obvious” were a bit off. More accurately, it should be “To think I could actually lure them in in an instant…” and “As expected, were they not too easy?”.

In the official translation, Mile’s line implied she was trying to sneak in unnoticed, and Nano’s line implied it was her actions which were too obvious, not that the thugs were simple. 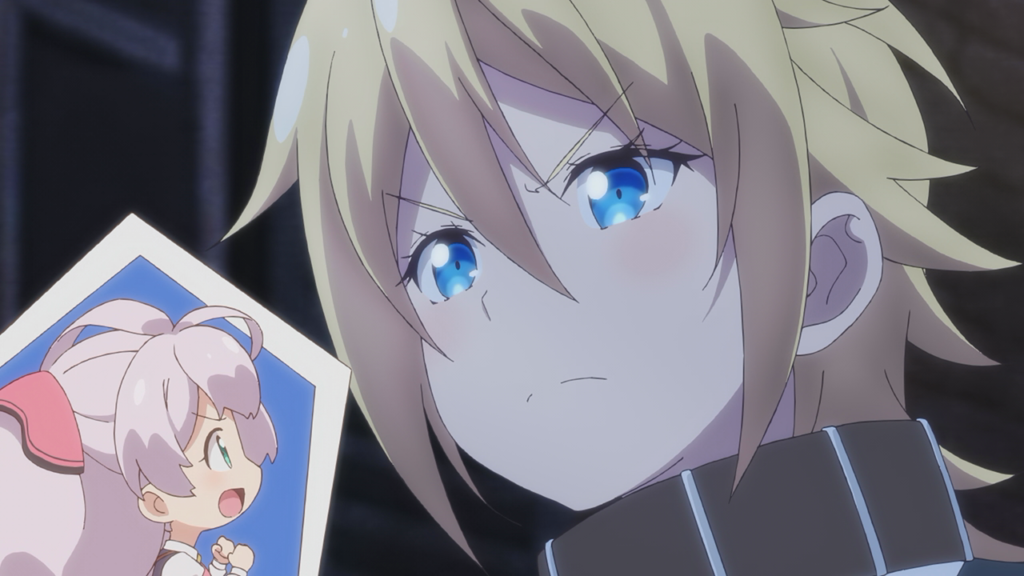 The line the female knight says and which Mile said was from a manga was “akutou ni nanoru namae nante nai” (roughly, “I have no name to give to villians”). It was actually a parody of the line ” 貴様らに名乗る名前は無い！！ / kisamara ni nanoru na ha nai!!” (a rude way of saying “I have no name to give to you people!!”) from the anime Machine Robo Chronos Daigyakushuu / Machine Robo: Revenge of Cronos. 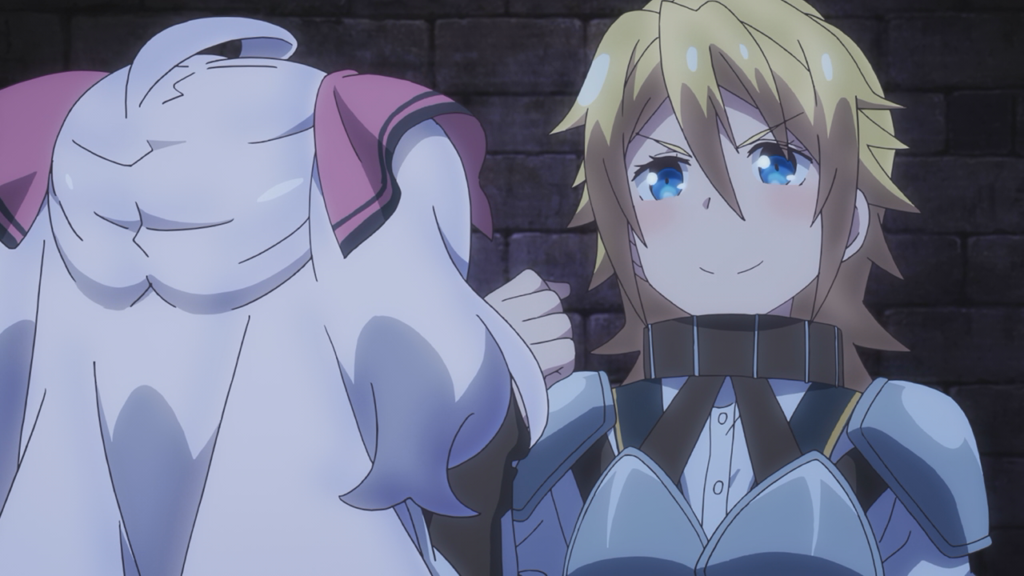 “Kukkoro” was translated officially as “Maybe she’s the super-honorable martyr type?”. However, that is not really accurate. “くっころ / Kuk… koro!” is a abbreviation of “くっ…殺せ！/ Kuk… korose!” which roughly translates to a frustrated sign followed by  “kill (me)!”.

“Kuk… korose!” is the typical line said by a female fighter (usually a knight who also has a lot of pride) in Japanese R18+ fiction after being defeated (typically by sleazy bad guys, orcs, etc.). Typically, the female is denied death and then the ones who beat her have their way with her body. The abbreviation “kukkoro” is usually only ever used as a reference to the situation where someone would say “kuk… kill me!”. This is why Mile was in disbelief at herself while blushing right afterwards because she associated the knight with something outrageously perverted.

That a high school girl would know of such a trope and even the very otaku term for it is highly unusual. That and her knowledge of other relatively old works may be a foreshadow to something. 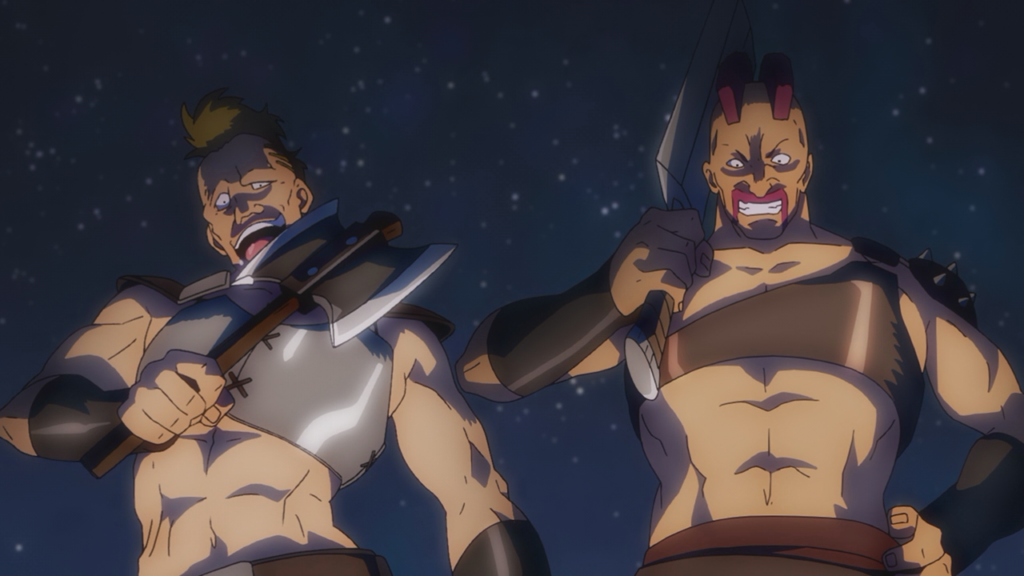 Mile’s mention of bad guys who are “Century’s End-like” is a reference to the Century’s End (Seikimatsu) from the manga Hokuto no Ken, the world ruled by rampant violence and civilisation and order had perished. The bad guys look like the ones typically appearing in such a world.

Additionally, the “hya-ha” (more correctly, “hyahhaa”) is like the shout of joy of such bad guys. 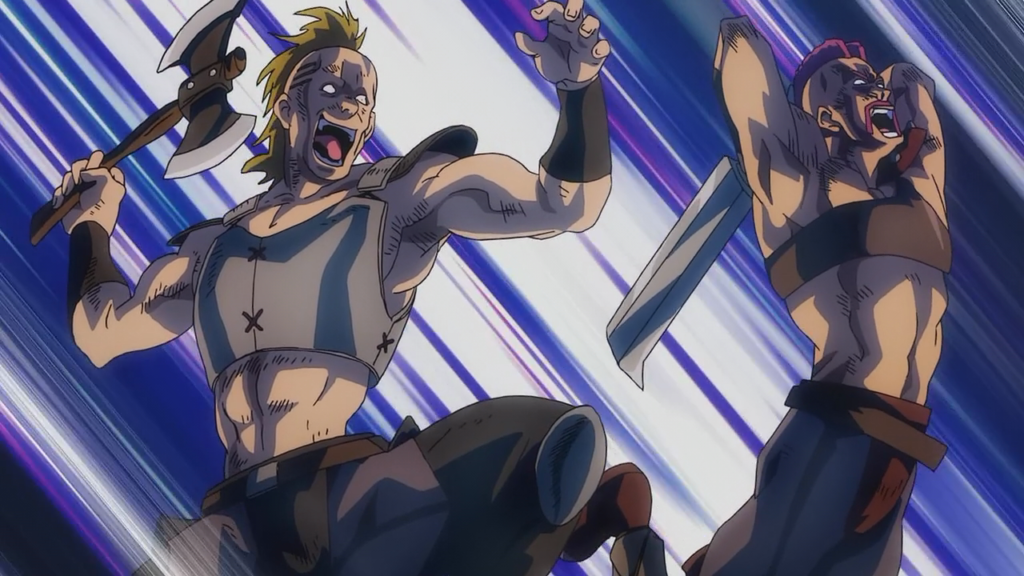 The “hya-ha” (more correctly, “hyahhaa”) is like the shout of joy of the Century’s End bad guys. 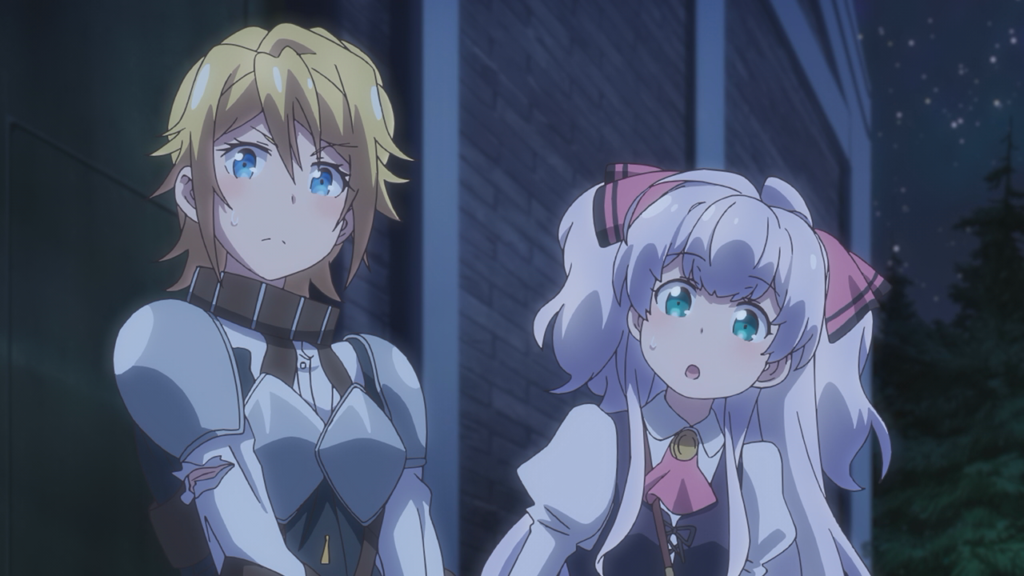 “Obutsu wa shoudoku” (roughly, “the garbage/filth are to be sterilised”) is a reference to the line “汚物は消毒だー! / Obutsu wa shoudoku daa!” (same meaning) from Hokuto no Ken, where one Century’s End-type bad guy character uses a flamethrower to brutally burn to death some villagers. 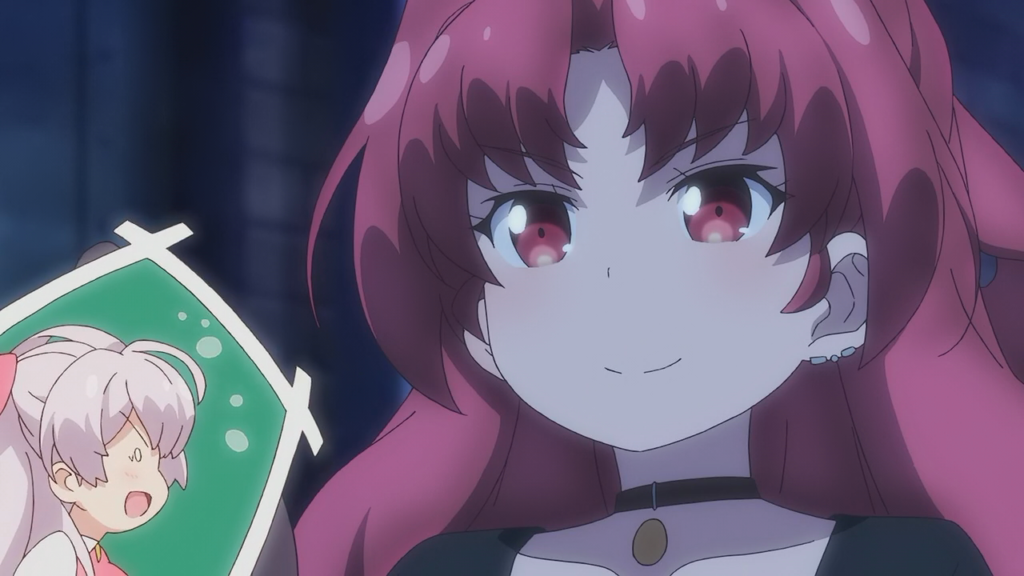 Reina says of herself that “people call her Reina of Crimson”. Since she claimed, herself, that others call her that, it was strange and that was why Mile said “she said it herself” (or “She told us herself!” in the official translation). The official translation, “Also known as the Crimson Reina” omits the detail that “Crimson Reina” is what she claims other people call her. 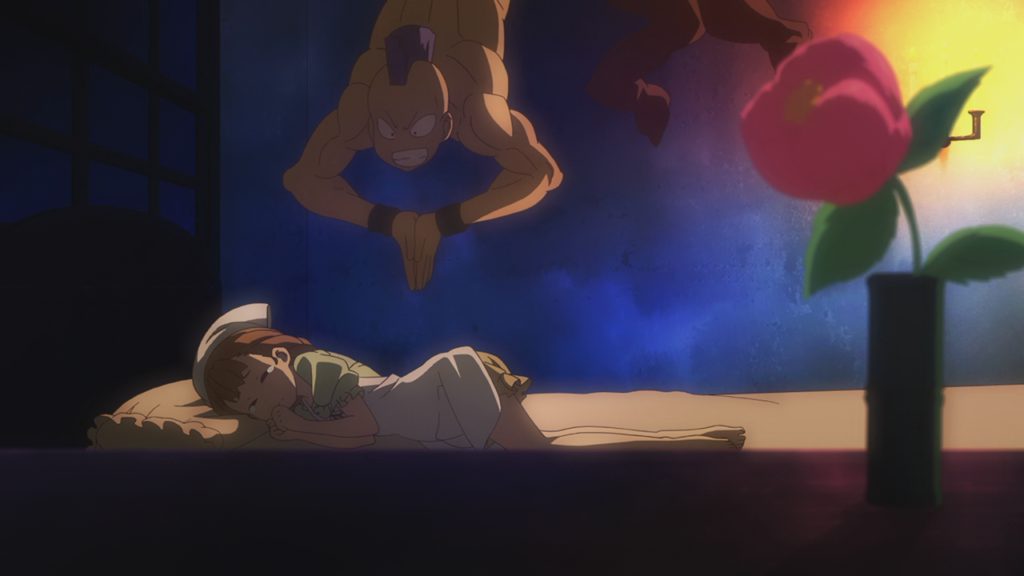 The bad guy’s action where he strips while jumping at the girl at the same time is known as the “Lupin dive” from the Lupin III series. 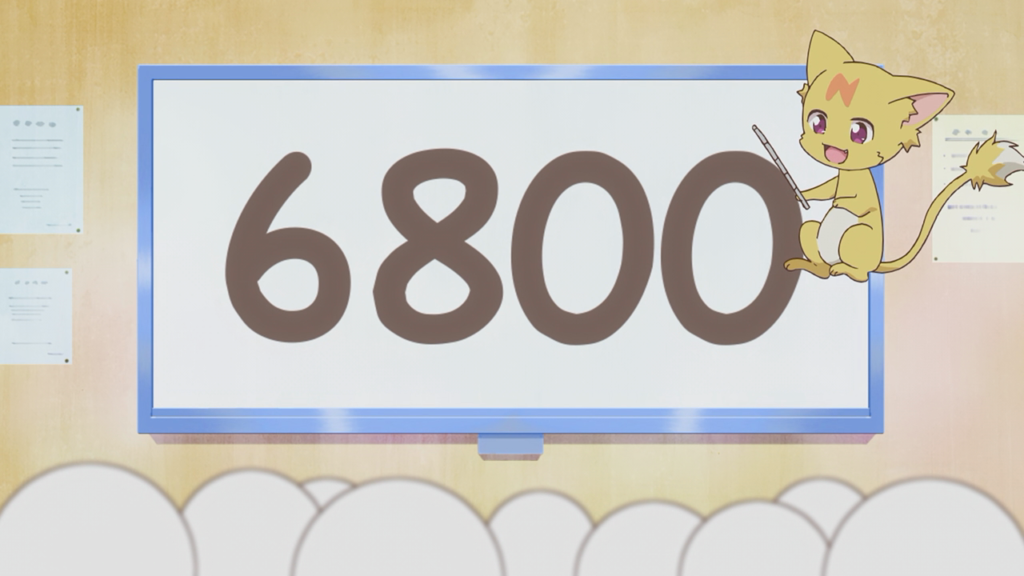 The 6800 times more may be a parody of the bones becoming 6600 times stronger-than-diamond effect from the manga series Paaman (or Perman in English). 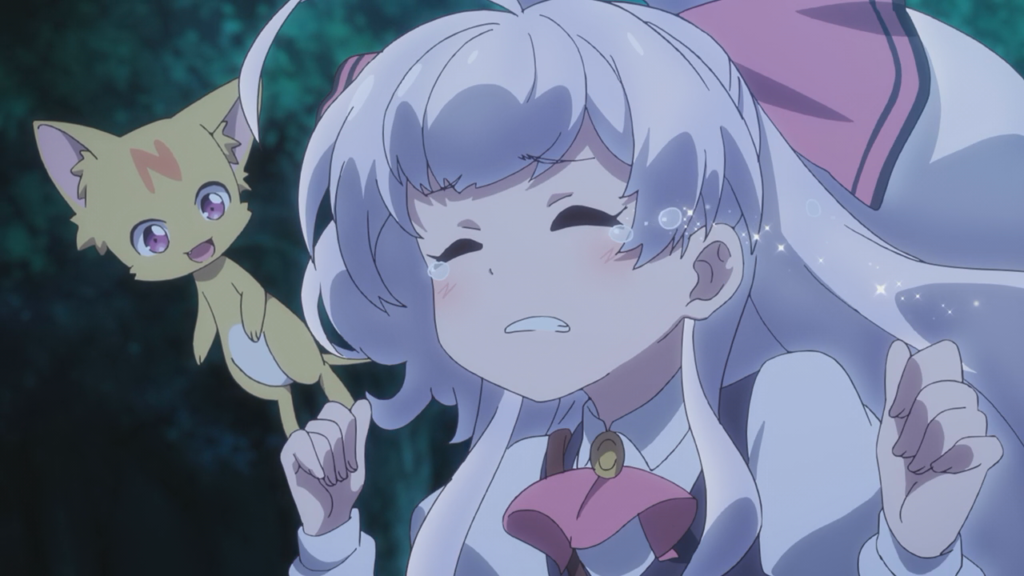 The “I’m not some mage who arrived on the back of a dragon!” was a reference to Lina Inverse from the manga and anime series Slayers who’s nickname is “Doramata Lina” from ”doragon mo mataide tooru” (roughly, “saddling even dragons to pass through”). 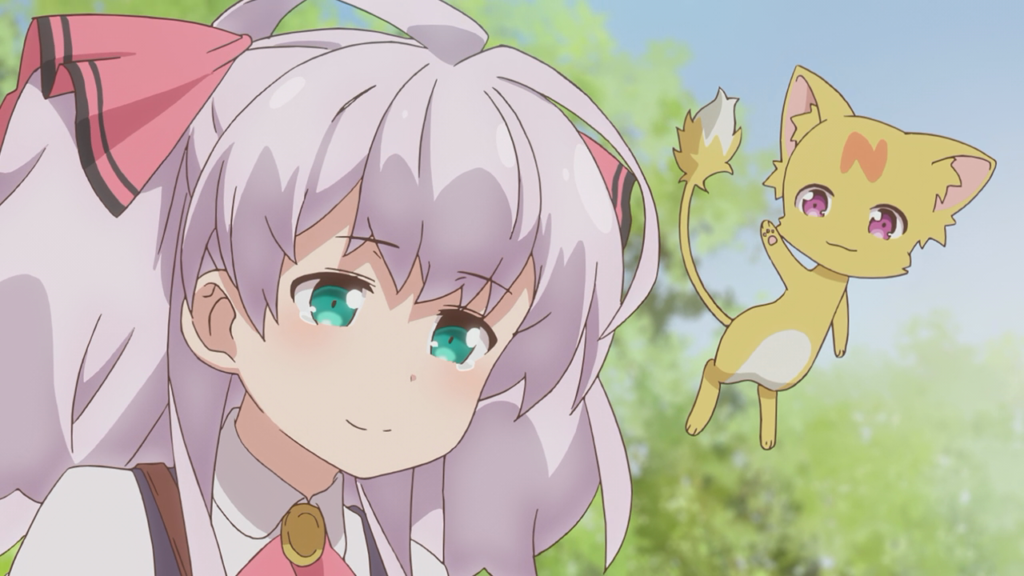 Nano’s “Did something just stand up?” refers to a flag standing up, where a flag is like an indicator triggered by some event or action in the story which then indicates a future specific story development or situation that will occur. For example, a “death flag” indicates death will occur. In this case, the flag trigger was her saying she would surely not see the other 3 girls again, and the flag foreshadows that she would see them again.

Mile’s response “Stand up? You mean like Clara?” is a reference to Clara from the children’s fiction story Heidi.